I always say that when I am not at work I usually feel like I am on vacation. That is the BEST part about living in San Diego. We spend the majority of our actual vacation days traveling to Michigan to visit family, but we often make quick weekend trips to Idyllwild, Santa Barbara, or somewhere else in California.

A few weekends ago, I had to go to Northern California for work so we decided to go to San Francisco for the second time and to visit Napa for the first time. It was a quick three-day trip, but we managed to do a lot in the time that we had.

San Francisco is a huge, somewhat overwhelming city. There is a lot to see and do, so it is best to plan a little before heading there. About four years ago when we went my goals were to visit City Lights Bookstore (Howl!), Muir Woods, and the tourist trap restaurant The Stinking Rose. This time we wanted to experience new things.

Random tips for traveling in San Francisco: Take public transportation – parking is ridiculously expensive and hard to find. There are a lot of homeless people in San Francisco – bring dollar bills if you are a bleeding heart. Wear walking shoes – we walked over 10 miles in one day. We stayed at the Westin St. Francis in Union Square – it was fine, but Union Square is my least favorite part of San Francisco.

After 1 1/2 days in San Francisco we rented a car and drove 45 minutes to Napa. The grapes had just been harvested and the warm, red colors of autumn were everywhere. 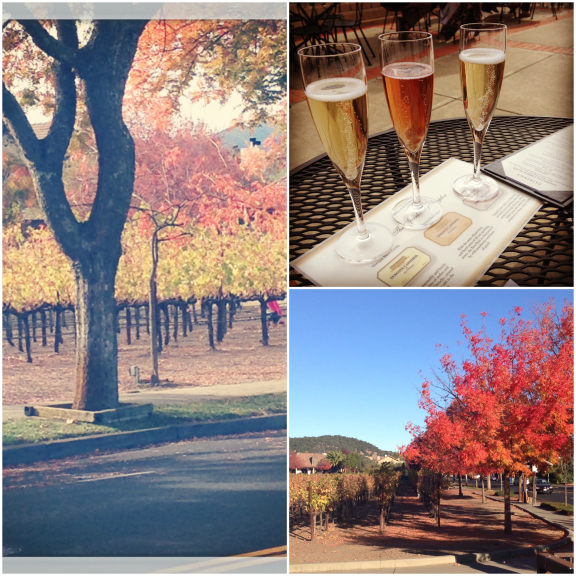 Where we slept and RELAXED:

I think there was one or two more. To tell you the truth I can’t tell you much about them. We had fun, we drank, and we enjoyed doing nothing except sipping on wine for the day.

We biked past the French Laundry…maybe next time we go we’ll pay $270 for the vegetable tasting menu. I doubt it though.

I love quick escapes, but coming back to our home is ALWAYS the best part of a vacation.