I am not over-exaggerating when I say that Ruby has almost died AT LEAST 5x in her 4.5 short years. Not a day goes by that I am not grateful for her. This dog has a good life, and like all animals she has a story. I’m thankful her story is wrapped up in mine.

A few weeks ago I read an article about Dr. Martin Blaser and it made me think a lot about the risks vs rewards of science. Blaser’s research focuses on missing microbes because of antibiotics. An article on the NPR website states:

We have had antibiotics since the mid-1940s — just about as long as we have had the atomic bomb, as Dr. Martin J. Blaser points out — and our big mistake was failing long ago to appreciate the parallels between the two. Antibiotics have cowed many of our old bacterial enemies into submission: We aimed to blast them off the planet, and we dosed accordingly. Now we are beginning to reap the consequences. It turns out that not all germs are bad — and even some bad germs are not all bad.

Blaser believes that antibiotics in young children can cause a gut imbalance of the positive bacteria which may cause a susceptibility to severe allergies. Our overuse of antibiotics, one of the very best discoveries of the 20th century, causes repercussions that are slowly emerging.

For the last few years, I have been 100% convinced that Ruby, our wonderful, crazy, weird lovebug of a dog has horrible allergies because she had 4 courses of antiobiotics in her first 8 months of life. Reading about this research confirmed my suspicions.

As a newly adopted rescue puppy, Ruby came to us with severe giardia and stomach issues. At night, I would fall asleep wondering if she would be alive in the morning. We were at the vet every other week trying to get her fixed – luckily, we had a fantastic vet who assured us that we would get her healthy. It became our mission to cure her. We tried many, many things – among them antibiotics. We gave her antibiotics to cure the giardia 2x. The first dose didn’t work, the 2nd one worked a little better. We gave her another dose of antibiotics after she was spayed. And we gave her a 4th dose after more stomach issues caused her to have blood in her poo.

After the last dose of antibiotics did not fully cure her belly aches, at 8 months old, we had Ruby tested for food allergies. The test cost about $300 – it was worth every penny, because it showed strong reactions to poultry, peas, peanut butter, potatoes, wheat, and eggs. These were all the foods we had been feeding her while she was on antibiotics. Although her food allergies were severe, we were glad to know that there may be finally something that we could do to help her get better. 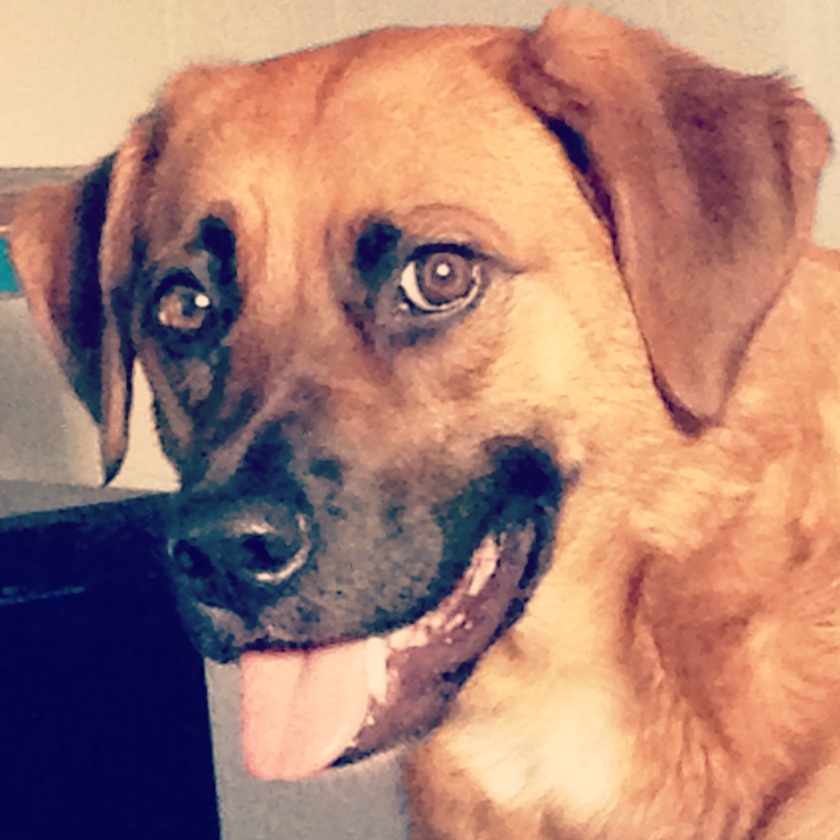 We changed her food, and Ruby slowly got better. She gained weight and after a super stressful first year, she finally became healthy. We don’t know if it was the antiobiotics, or she started growing out of her ailments, or the food switch to avoid allergens, or the probiotics we added her to her food (she still gets them), or all the love and snuggles we gave her. In reality, it was probably a combination of different things.

About 2.5 years ago we found out that Ruby’s allergies weren’t just limited to foods.

One Sunday night at dusk, Ruby was running around the yard, and then she was running sideways like she was drunk. I told her to come in the house because she was acting like a nut – she ran in, jumped on the couch and peed all over it. Her eyes were unfocused and she looked terrified. She started towards the door, and poo & vomit came out of her, and then she collapsed. We had NO idea what happened.

We picked up her limp body, put her in the car, and raced to the emergency room vet. The 15 minute drive took forever. Sean drove, while I sat in the hatchback with Ruby in my lap. She was barely breathing, with blueish lips, and cold limbs. We called the vet on the way, and they were waiting for us with a stretcher to rush her into the operating room. After 10 minutes of anxious waiting, we learned that Ruby had been stung by a bee (in her mouth) which caused anaphylactic shock. In dogs, anaphylaxis manifests itself by shutting down the gastrointestinal and cardiovascular systems. It is not pretty.

After we found out what happened and that she would be okay, I started shaking and crying and had a hard time pulling myself together. Ruby had to stay overnight at the vet, but before we left her, we went to see her in the back. She looked at us, snuggled into my hands, and thumped her tail a few times to let us know she’d be okay. Heartbreaker.

Bees are everywhere. We noticed this immediately after we got home. The vet told us that each time she got stung the reaction would be worse. Sean and I were terrified.

I’ll write about what happened next in a few days, but honestly, it is hard to write about. I am superstitious about Ruby. Ruby has days when she is moody and bratty, but even on those days I am overwhelmed with love for her.

I’ll wonder for my entire life if the antibiotics caused all of the allergies. And I’ll wonder if they saved her life when she was a sick pup. And what would I do if given a do-over…