Skip to content
Growing up we had a subscription to the Detroit Free Press that was delivered 7 days a week. Before school I’d skim the headlines and read the comics –  but, the real reason to read the paper was the LIFE section where 2 or 3 days a week there would be a column by Susan Ager (yes, the Free Press also has Mitch Albom – but believe me, Ager’s column topped his!). Ager wrote for the Free Press for about 16 years, and I’m sure I read at least 80% of her columns. 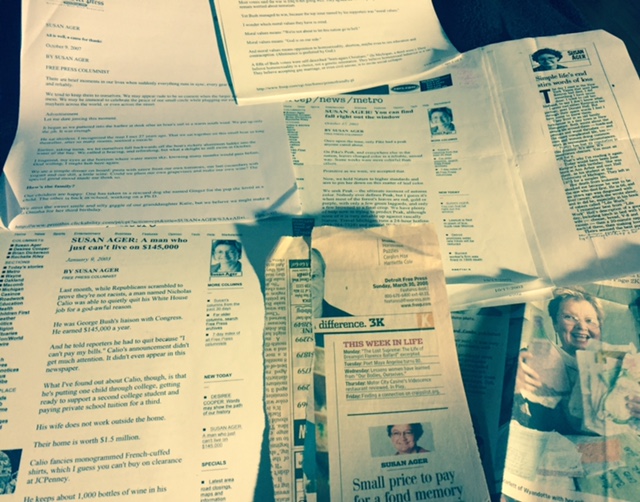 I have about 12 Ager columns that have traveled with me over the last 10-15 years. They are columns that I’ve shared with other people, or that were sent to me by family members in Michigan after I moved to California. For many years, family conversations would involve the words “Did you read the Susan Ager column about…”

Ager opened up my mind many, many times as I was growing up. She wrote passionately about marriage equality in the 1990’s before it was a conversation that people were regularly having. She introduced me to my climate hero, Bill McKibben, with a column she wrote about his awesome (and somewhat controversial) book “Maybe One: A Case for Smaller Families.” I’ve seen McKibben speak multiple times and I’ve read everything he writes. I wonder when I would have learned about him if she had not brokered the introduction.

I also partly thank Ager for my love of poetry, particularly the poems of Jane Kenyon. In 1995 she wrote a column (Simple life’s end stirs words of loss) that my Aunt Nanc loved about Kenyon and her untimely death from cancer. My Aunt Nanc asked me to send her the full book of poetry (which I read before putting in the mail) and since then I have read her poems over and over. Here’s a few if you are interested: Let Evening Come, Otherwise, Coming Home at Twilight in Late Summer, and After an Illness, Walking the Dog.

I also think that Ager introduced me to Wendell Berry, but I can’t remember the specific column for that. Overall, her columns explored our shared humanity, the small kindnesses that people are capable of, and a strong appreciation of nature and a simple life with everyday pleasures. This morning I stood in a pounding hot shower looking out the high window at the clouds changing from light blue to dark violet to bright, hot pink as the sun rose. A group of over a 100 crows passed by, squawking and joyful. A great way to start the day, and a simple pleasure that I fully appreciated. I thought to myself that Susan Ager could write an entire column about this one moment.

In a 2003 column titled A man who just can’t live on $145,000 Ager opens with “Last month, while Republicans scrambled to prove they’re not racists, a man named Nicholas Calio was able to quietly quit his White House job for a god-awful reason. He was George W. Bush’s liaison with Congress. He earned $145,00 a year. And he told reporters he had to quit because “I can’t pay my bills.” Ager then goes on to ponder how a person can not live on $145,000/year and the utter absurdity of it.

After George W. Bush was re-elected in 2004 her column (Day after big mess brings fear, hope) began with “My first thoughts the morning after: Congratulations George W. Bush. The mess you’ve made remains yours to clean up. The mess in Iraq is yours. The deficit mess is yours. The health care mess is yours…”  Her frustration with so-called “moral values” is evident throughout the column.

I’ve been thinking a lot about Susan Ager lately because I wish she was writing during this insane election. We need her clear, reasonable voice over the coming years. It’s amazing how someone I have never met can mean so much to me.

To read some of Ager’s best-loved column, check out her website here.

Lately, all I want to read is escapist fiction -here’s some good stuff…

Sweetbitter by Stephanie Danler- A well-written novel injected with pieces of poetry about the restaurant industry, New York City, and being young and naive. Juicy and a little scandalous.

My Last Continent by Midge Raymond – This may have been my favorite book of the year and I read it in one day. It’s a love story. It’s an environmental warning. It’s main character is a woman researcher. And there are penguins…go read it.

Before the Fall by Noah Hawley – A tragic plane crash occurs with 2 survivors and lots of questions about what happened. A great read (with the caveat that the ending is not the best part of the book).

The Nest by Cynthia Sweeney – Family drama involving an inheritance.

I read this little story by Ted Chiang (author who wrote the story that ended up being the movie Arrival) the other day. I loved it – maybe you will too?

This interview with Anthony Bourdain is precisely why I love watching his show Parts Unknown.

This interview with Megyn Kelley on Fresh Air is the best podcast I have listened to in a long time. She is eloquent and strong and impressive. Unbelievable that the man who bullied her is now going to be our President.